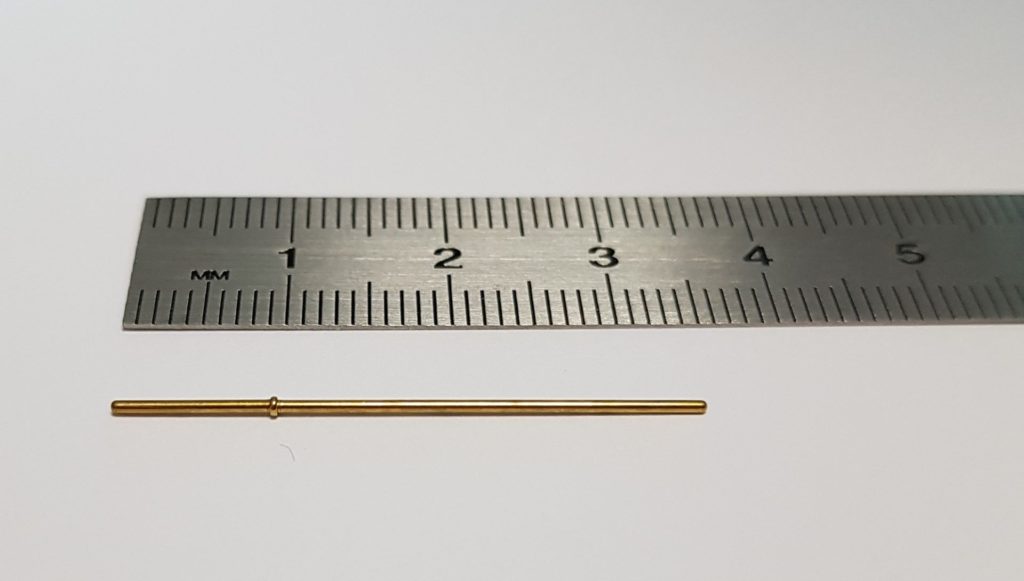 In 2012, our client, Connectors Deutsch, came to us to produce a new generation of brass connector pins for harsh environments, with a very low price target, which prevented them from procuring from bar-turning companies.

What makes these connector pins unconventional is the fact that they have a collar (or head) which resides not at the end but rather towards the centre of the pin, which is referred to as a shaft for its similarity to such weapons as pikes and lances.

The Delta Neo team suggested that, instead of using a bar-turning process, which is too expensive as it involves significant material loss, the required shape could be obtained by cold opened die stamping brass wire, without any removal of swarf.

This alternative process rests on the material’s potential for deformation by cold opened die stamping (buckling) and makes it possible to meet the client’s requirements for geometric precision (+/-0.08 mm tolerance on the collar’s diameter with a longitudinal position of the collar dimensioned to +/-0.05 mm).

What’s more, this same pin would need to be radiused at both ends. Once again, the Delta Neo team presented another alternative to bar-turning: tribofinishing would make it possible to use abrasion to obtain a nearly hemispherical radius at both ends.

The client’s quality requirements were met, allowing them to enter into an agreement with us. To date, we have produced about 10 million of these types of parts via these two alternative processes that replace bar-turning.

This ability to not only master but combine industrial technologies is an edge that sets Delta Neo apart.

Are you interested in contacting us about inventing processes that will help you stand out in your markets?